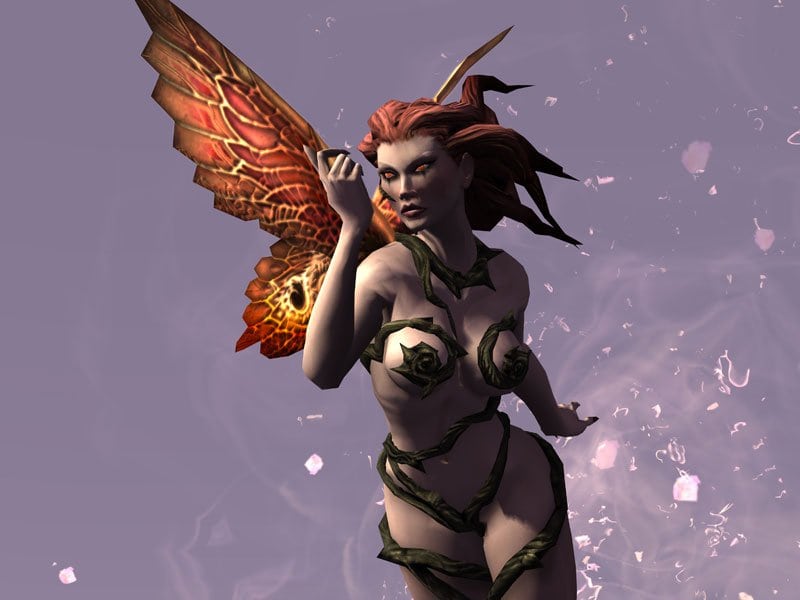 The faeries of the forest were invisible to men, but were as plain as the sun to small creatures and growing things. They helped maintain order in myriad ways — by gently reminding the lilies to bloom, by mediating disputes between the mushrooms and beetles, by politely asking the birches if they might move their branches a little so a walnut sapling could have some light. They did not rule the forest, but influenced it in countless ways to help maintain a perfect, delicate balance. They always asked nicely, and were thus always obeyed.

One April morning, a strange faerie-child was born. She had bright red hair, which had never been seen before. She also seemed heavier, more substantial than other faeries. As she grew older, she found that when she walked in the field, her feet crushed the grass while other fairies lilted along without moving a single blade. When her sisters tried to teach her how to waft dandelion seeds to open soil, she blew too hard and sent them tumbling. They tried to show her how to warm a sparrow egg in her hands, but its warmth seemed to flow out of it and it cracked and crumbled before her eyes.

The oldest faeries, in their consternation, finally assigned her to insect duty — the durable carapaces of centipedes and ladybugs withstood her harsh treatment, and for her part she seemed to have a special affection for things that skittered and stung. Other faeries looked on her ungainliness with pity, but were content that she seemed to have found her place in the order of things. She did her duty and in time became an adult.

She was on her way to meet the Ant Queen when she happened across a man in the forest. She had never seen a human before, and looked at him with great curiosity. He was about her height, but wingless and covered with clothing, which looked terribly uncomfortable. It took her a moment to realize that he was staring at her, as well.

“Who… who are you?” the man stammered.

“You can see me?” The faerie looked confused, but not frightened.

The man indeed saw her nakedness and her wings and could not look away. Faeries are particularly sensitive to subtle signs, and for her part, she could clearly see that she had some particular influence over this man. After only a few minutes with her, he pledged his undying love and swore to bring her anything she wanted. She could not think of anything she could possibly need, but invited him to visit again the next time he happened through the forest. She giggled as he stumbled away and she found, upon reflection, that she enjoyed the sensation of controlling another living thing.

When she told her sisters about the encounter, they flew into an exasperated tizzy. “This is unnatural,” they cried. “How is it that you are visible to men? You cannot bring them here, sister! They will destroy the forest!”

Regardless, the man came back to the same spot a day later, and she was there to greet him. Again were his eyes transfixed upon her (less upon her face than on her other parts, she noted), and his breathing became uneven. At last he could not control himself and took her in his arms, pressing his mouth against hers. She had little time to resist, since the color quickly went out of his face and he dropped to the ground, dead. She felt his life force flowing inside her like some drug, and was exhilarated. This was a new and unusual power, and she wanted to explore its limits. She now saw that she had special gifts.

Moving through the forest, she barked commands at everything. She told ferns to turn pink. She told mushrooms to dance. She demanded that the stag-beetles grow as big as wild boars. All obeyed her. She was flushed with the possibilities — no faerie had ever thought to make demands of the forest-dwellers, and she was suddenly angered by her sisters’ naiveté and condescension. Thenceforth, she never moved through the forest on her own feet, riding instead upon a rose-chariot that stood upon the backs of four great beetles. She was also the first faerie to give herself a name: The Queen of Thorns.

Over the following weeks, more men came to the forest in search of their lost comrade. She was able to deal with the first dozen or so in the same way she had managed the first, but they eventually grew wise and started showing up in small, well-armed groups. Faced with a party of archers, she commanded the elm trees to uproot themselves and savage the band of humans. This they did, even though by these exertions they brought about their own deaths, for they could not get their roots back into the ground.

Coming upon the piles of dead men and trees, her sisters saw that a monster had grown in their midst. They gave her a choice: she could take her own life or leave the forest forever.

The Queen of Thorns laughed. “If you can’t manage to kill me yourselves, I can’t think why I should do your dirty work for you!” She snorted. “Besides, there is a greater world — a world of power — beyond the forest. I wish you all long winters!”

With that, her insect-chariot carried her away, leaving a crushed swath of fallen flowers in its wake.